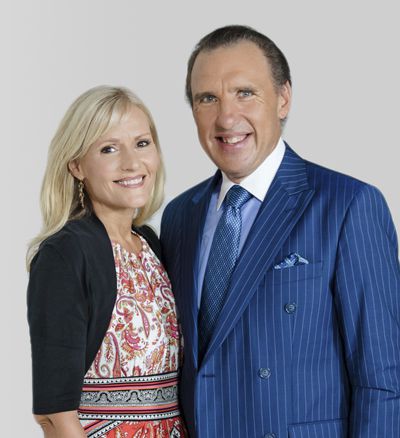 Drs. Rodney and Adonica Howard-Browne are the founders of Revival Ministries International, The River at Tampa Bay Church, River Bible Institute, River School of Worship, and River School of Government in Tampa, Florida.

In December of 1987, Rodney, along with his wife, Adonica, and their three children, Kirsten, Kelly and Kenneth, moved from their native land, South Africa, to the United States – called by God as missionaries from Africa to America. The Lord had spoken through Rodney in a word of prophecy and declared: “As America has sown missionaries over the last 200 years, I am going to raise up people from other nations to come to the United States of America. I am sending a mighty revival to America.”

In April of 1989, the Lord sent a revival of signs and wonders and miracles that began in a church in Clifton Park, New York, that has continued until today, resulting in thousands of people being touched and changed as they encounter the presence of the living God! God is still moving today – saving, healing, delivering, restoring, and setting free!

Drs. Rodney and Adonica’s second daughter, Kelly, was born with an incurable lung disease called Cystic Fibrosis. This demonic disease slowly destroyed her lungs. Early on Christmas morning 2002, at the age of eighteen, she ran out of lung capacity and breathed out her last breath. They placed her into the arms of her Lord and Savior and then vowed a vow. First, they vowed that the devil would pay for what he had done to their family. Secondly, they vowed to do everything in their power, with the help of the Lord, to win 100 million souls to Jesus and to put $1 billion into world missions and the harvest of souls.

Believing for another Great Spiritual Awakening, Drs. Rodney and Adonica conducted Celebrate America DC, a soul-winning event. They preached the Gospel of Jesus Christ for twenty-nine nights in Washington, DC at the Daughters of the American Revolution Constitution Hall, just 500 yards from the White House, from 2014-2017. Through the evangelism efforts on the streets, in the halls of Congress, and the nightly altar calls, 52,434 individuals made decisions for Jesus Christ.

On July 10, 2017, the last day of the meetings at the DAR, Drs. Rodney and Adonica were given the opportunity to spend the day at the White House. With a group of twenty-five others, they were invited into the Oval Office to visit President Trump. It was a surreal and humbling moment. They saw Protestant, Evangelical, and Pentecostal leaders coming together with the common purpose to pray for the President of the United States of America. President Trump was open to and sincerely welcomed their prayers.

While standing in the Oval Office, Dr. Rodney was asked to pray for President Trump. He prayed for his protection, for godly wisdom to be his portion, and that the wicked would be cut off and rooted out. It wasn’t a long prayer; it was a fervent and heartfelt one. Once Dr. Rodney left the Oval Office, he successfully launched a 24/7 prayer initiative for President Trump.

With a passion for souls and a passion to revive and mobilize the Body of Christ, Drs. Rodney and Adonica have conducted soul-winning efforts throughout fifty-seven nations with Good News campaigns, R.M.I. Revivals, and the Great Awakening Tours. As a result, over 17,755,700 precious people have come to Christ and tens of thousands of believers have been revived and mobilized to preach the Gospel of Jesus Christ.